Friends, if you are a blogger then there is very big news for you. Google has recently sent an email to all its creators, in which Google has told that in the coming few days it will going to enable Anchor Ad on Desktop as well.

This announcement you will see also in the AdSense account as a Notification.

Google AdSense is a very big and good monetization program that is run by Google itself. If you also earn money with the help of this program, then this information is going to be very beneficial for you.

Friends, you place different ads of AdSense on your blog or website. Some people use Auto Ads while some people use Manual Ads. It is your own choice of which ads you want to use.

You must have seen that there is a feature in the Auto Ad section of Google which is Anchor Ad. Anchor Ad, which tills now used to work only on mobile phones. But in the recent announcement of Google, Google has told all the creators with the help of email that it is now going to enable this Anchor Ad on devices with Wider Screen as well. e.g. Computer, Laptop

What is Anchor Ads?

An anchor Ad is a type of ad that appears either at the top or bottom of the device screen. Anchor Ad was being shown only on mobile till now but after a few days, it will also appear on devices like computers, laptop’s.

Anchor Ad is placed in two places in the device, at the top or bottom of the device screen. The ad used at the top is visible only when the user scrolls the web page. There is no need to scroll to see the Anchor Ad used at the same bottom.

As soon as the ad code is loaded, this ad starts appearing. You can also close Anchor Ad, that is, you can also minimize and maximize. For how this ad looks, you can see it in the images shown below.

On scrolling the web page in the Top Anchor Ad Mobile Phone, it starts appearing. Just like our other ads are just late to load and they start appearing, in the same way, the page has to be scrolled for anchor ads. This ad becomes active only when we scroll the page. 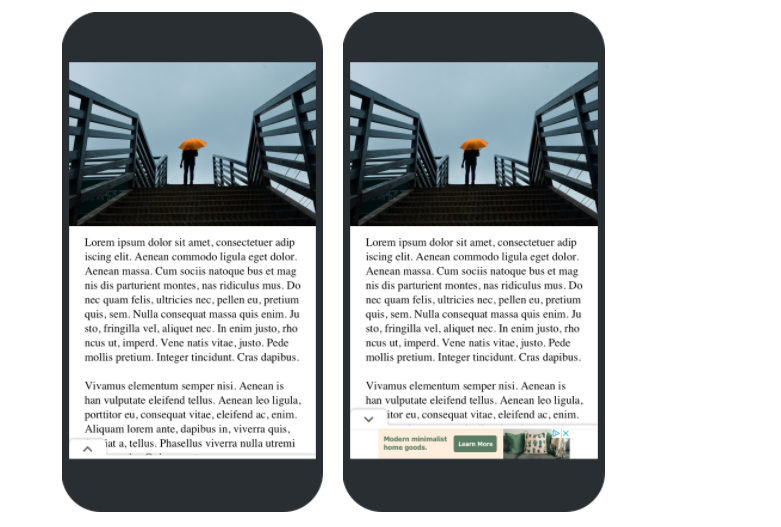 The way we can place other ads wherever we want with the help of ad code, we cannot do it with anchor ads. This ad is a Sticky Ad that is either placed at the bottom or at the top or with the help of some extra plugin, you can put it in both places simultaneously, but it cannot be placed in the middle of the Web Page or in the Widgets.

Friends, we have seen how AdSense Anchor Ad looks on mobile devices, now we will see how Anchor Ad will look on Desktop. Although you may not find many images about it on Google, you can still see how the anchor ad will look on the desktop.

For example, to activate the anchor ad of our mobile phone, it is necessary to scroll. In the same way, the anchor ad appearing on the desktop not needs action to be active it.

If you want to see it live, then you have to go to your AdSense account and see how it works.

How to enable AdSense Anchor Ads on Desktop?

By the way, according to the information given by Google, this ad will automatically appear on the site. But if it is not showing on your site then you have to enable it yourself. For this, you can enable anchor ads on the desktop by following further procedures.

Step 3. Below you will see the list of your sites, click on the edit section of any of them (or the one for which you want to activate Anchor Ad on desktop).

Step 4. On the right side you will see many options, out of which you have to click on Ad Formats. 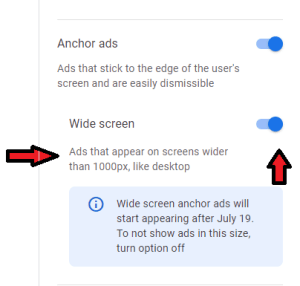 Step 5. If the option next to Wide Screen is checked, then let it remain the same. If it is not checked then and enable it.

When will AdSense Anchor appear on Ads Desktop?

According to the information given by Google, this ad feature will start appearing from 19th July 2021. We will give the link to this official update below, you can check it.

How to Disable AdSense Anchor Ads on Desktop?

If you want the AdSense Anchor Ad is not visible on the desktop, then for this you have to follow the previous Step 5 in reverse.

That is, disable the option that is enabled next to the widescreen, your ad will not be visible on the desktop device.

Today means that on Sep-12 -2021, we visited many sites, and we found Desktop Anchor Ad visible. You can see it below

Perhaps it has been enabled for all users now.

Is this ad appearing on your devide or not, please tell us by commenting. Thanks for visiting…